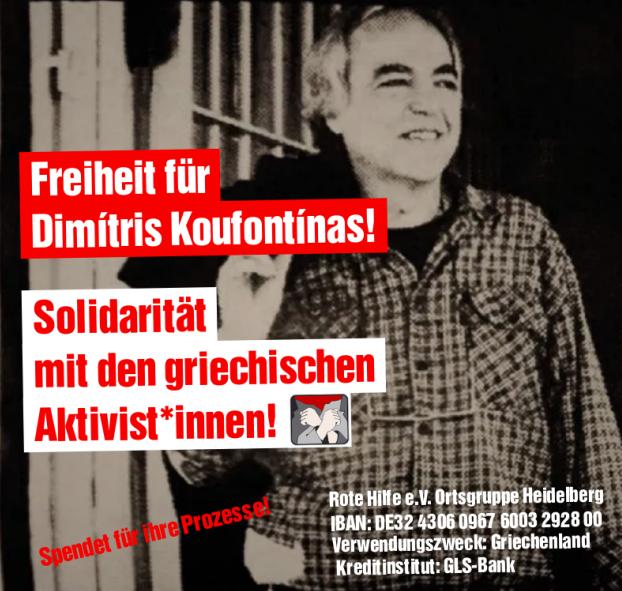 In solidarity with political prisoner Dimítris Koufontínas, who was on hunger strike from January 8th to March 14th 2021 (65 days) in protest against his opprobrious treatment, bordering on revenge, by the Greek government, thousands of supporters took to the streets in recent weeks. The state responded with brutal force, arresting hundreds of demonstrators who now face a wide range of charges. These include obstruction of civil service functions, disobedience of official orders, but above all violation of the rigid Corona measures, which also curtail the fundamental right to freedom of assembly and are now being deliberately used by the authorities to suppress unpopular opinions and left and anarchist movements. In two protest marches alone, all participants, nearly 190 people, were arrested, and dozens to hundreds are also being arrested at larger demonstrations in Athens and in other major cities such as Thessaloníki. Already in spring, court procedures will begin against at least 70 solidarity activists who will be conducted in four major trials. They organized a peaceful intervention at the Ministry of Health on 18/2. Compared to other interventions that take only five to ten minutes to distribute pamphlets and briefly shout slogans, the comrades dispersed in the building and lingered there for an hour, protesting against the treatment of Dimitris Koufontinas and at the same time against the disastrous pandemic administration, before being picked up by a large number of police officers and transported to the central police headquarters of Athens where they were piled on top of each other without the slightest respect for hygiene rules. In order not to leave the victims alone with the consequences of repression, we are calling for donations in cooperation with “Red Aid” (German organisation supporting political prisoners and repression victims) to collectively support the defendants with the enormous sums for lawyers’ and court costs for the upcoming trials. You can use the following account for this purpose:

*Notes by the translator in brackets ()

“New Democracy (ND, the ruling party) murders hunger striker Dimitris Koufontinas.
The administration of the pandemic is a state crime.

LET’S NOT GET USED TO DEATH

For a year now, the pandemic administration has been about subjugating the poor, the powerless, the oppressed. The government’s refusal to strengthen the national health system as needed and its decision to terrorize an entire society, to bend it with humiliating controls and restrictions of dictatorial origin, to hand out fines that devastate the poor, is a state crime. It apparently affects only those who cannot pay. The social quarantine came to stay and is already enforced; with the panoptic control of the cities, the integration of state orders through dystopian methods to monitor and inactivate society by locking it in the homes, culminating with the deployment of the military to control the working class cities of West Attica. All those who have no private insurance and of course cannot even cover their basic expenses, survive, if they are insured at all, on the government’s small-cut subsidies. The thousands of pandemic deaths are victims of the class politics of death, which abandons to their fate all those huddled together in buses and subways, in factories, in densely populated neighborhoods, in prisons, in concentration camps for refugees, in nursing homes, in psychiatric wards.
The repressive management of a health crisis aims to mute all voices of resistance so that we can accept the new rules of slavery. In a frenzy of all-weather cop recruitment – cops for education, instead of professors and cops for health, instead of nursing and medical staff – the state has the most fertile ground for exercising an even more extreme policy of neoliberal measures in all social fronts, passing one law after another in parliament while relentlessly beating any form of protest. The militarization of social life which is imposed behind the pretext of the pandemic concerns the preventive methods of counterinsurgency and the fortification of the state against a possible social explosion that will be caused by the coming bankruptcy.

42 DAYS OF HUNGER STRIKE AND ADMISSION TO THE ICU

The apparent murder of Dimitris Koufontinas is not an exception or special treatment of the bourgeois power against someone who actively challenged the state monopoly of violence. The policy that today destroys Koufontinas in a hospital cell is in fact the same policy that murders people of our class through intensive care shortages. The same policy that murders and cripples workers in workplaces, the same policy that bloodily represses demonstrations, the same policy that tomorrow will not hesitate to go to war in defense of capitalist interests. It is the policy of inhumanity, sadism, class violence and exploitation of human by human, and therefore the resistance to their thanatopolitics can be nothing but a matter of the working class and all the oppressed.
A characteristic example of this treatment is the obsessive revenge that is taking place around the person of the political prisoner D. Koufontinas. On 8/1, communist revolutionary D. Koufontinas launched a hunger strike demanding his direct transfer from Domokos prison to Korydallos prisons. In the unjust law they passed, there is a “photographic paragraph” (A paragraph that photographs a person, in the sense that the law was tailored for that person) that regulates that prisoners convicted of terrorism cannot be held in agrarian prisons, and the comrade was taken from the prison near Volos. But, instead of taking him to Korydallos, the original prison where he served his sentence, as their law states, he is transferred inappropriately, suddenly and through document falsification to Domokos, which is intended as a high security prison. Responsible for the documents’ forgery is the Secretary General for Anti-criminal Policy Sofia Nikolaou, who refuses to to hand over copies of the transfer documents even to the Citizen’s Attorney’s Office! (A central ombudscouncil that mediates as an independent authority in disputes between the state and citizens)
The regime has built a wall of silence behind which the vast majority of the country’s political personnel have been conscripted, along with the gaggle of the economically powerful, the heads of the broadcasting stations, the big journalists, the industrialists, the shipowners. A wall of silence that completely controls information and purposefully distracts, obscures and defames the solidarity actions and the struggle of the hunger striker.
The politicy of annihilation towards the fighter D. Koufontinas, does not concern only a political revanchism, although it also shows such features. It condenses the culmination of an ideological conflict that today’s vanguard of conservatism believes it can win. With its annihilation methodically carried out for years, they strive to completely beat and drive down the spirit of resistance. A spirit that was embodied in the decades of the political turnaround (After the fall of the dictatorship, 1974), through dozens of militant strikes, confrontational demonstrations, mass protests, uprisings and guerrilla actions to challenge the regime. That is why it is so important for them to torture out a statement of political repentance from D.Koufontinas to ratify their own victory against an entire era of resistance and struggle. Their entire argument about the defense of values and “democracy” against their declared enemy is hypocritical, since the same system of family rule had ensured the release of important leaders of the military dictatorship in the 90s. The same people who, in fact, dissolved that same democracy they now invoke and imposed a regime of terror; with thousands of persecutions, imprisonments, tortures, murders and the bloody repression in 1973 against the Polytechnic Uprising (when the student occupation of the Athens Polytechnic was broken up with tanks).
Apart from the fact that the future of class resistance is portrayed on the body of the hunger striker, the prosecutor of Domokos prison has published a decree ordering the medical staff to intervene if he loses his senses. We must make it clear that any intervention not authorized by the hunger striker is torture and was declared as such in the Malta International Declaration in 1991 and again in 2017.
With today’s intervetion in this particular building, on the one hand we try to break the murderous silence about the case of the hunger strike of the political prisoner D. Koufontinas and on the other hand we accuse the arbitrariness of the ND government and we demand the following:

The handing over of the forged document of General Secretary Nikolaou on the illegal transfer of D. Koufontinas to the Citizen’s Attorney’s Office.
THE IMMEDIATE TRANSFER OF THE REVOLUTIONARY DIMITRIS KOUFONTINAS TO THE PRISONS OF KORYDALLOS
NO STATE OF EXCEPTION FOR POLITICAL PRISONERS
This hunger strike is a beacon for the ongoing resistance against state absolutism. It is the thread of struggles that we follow to fight for his life and his just demands, it is a part of the social struggle against modern totalitarianism.
The authoritarian regime behind the pandemic pretext needs to stop.
The whole public health infrasctructure needs to be strengthened to the fullest.
Victory for the just demands of health workers

Let’s mobilize directly in our neighborhoods, in the places of education and work, in political collectives and organizations to overturn the policies of the state and capital. The world is changing, revolutions are feasible and everything is in our hands. “

This entry was posted in Call for Donations, English Texts. Bookmark the permalink.